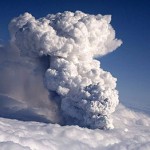 Just when you thought it was safe to book that holiday flight, the curse of the Icelandic ash cloud strikes again. Once more thousands of passengers in Europe have found themselves stranded in airports, as airspace was closed while the volcanic ash drifted past. First hit were the British isles, and for many here this latest bout of bad news from Iceland feels like the last straw.

There isn’t much to shout hurrah for in this country at the moment, with the government shedding public sector jobs right, left and centre in its dramatic drive to fix the enormous budget deficit. April’s royal wedding and lovely spring weather are but distant memories. But at least now, two years into the economic downturn, people have been able to plan and save up enough money to ditch the dreaded staycation and head abroad again for a PROPER holiday. No longer will the British put up with freezing local beaches and tacky seaside resorts, nor do they want to battle for space in over-crowded and under-equipped camp sites.

It’s time to fly away to sunny Spain, Portugal or Greece again – with the added benefit of feeling extra smug as you help prop up those countries’ beleaguered economies with your hard-earned Pounds. There’s been a sense – albeit ever so small – of optimism in the air. The budget airlines have even been re-opening routes to the promised lands of southern Europe, after the recession had forced them to scale down because nobody could afford the price of a ticket out of here.

So it’s wasn’t even remotely funny this week when another Icelandic volcano decided to unleash chaos on already hard-tested British tourists. Some of them Icesave customers. You know, those who lost their savings in Icesave accounts when Iceland’s banks went belly-up. They only got their money back because the British government took pity on them and used other taxpayer’s money to cover their losses, while waiting for compensation from Iceland. But the Icelanders have refused to pay for their banks’ follies, so THAT particular bit of the gaping hole in the British economy won’t be filled anytime soon.

You could excuse some of the tourists bedding down for another uncomfortable night on an airport bench this week for wondering whether anything good is going to come out of Iceland ever again.

Not only might they be forced into another staycation –  they’d also have to put up with equally miserable staycationists in the neighbouring tent whose only common interest will be a growing hatred for anything Icelandic. And yes, people here do realise the Icelandic people can’t turn their volcanoes on and off at will – but the entire situation represents a great chance to indulge in the British national sport of moaning.

Myself – I’m not taking any chances of getting stuck here. No high-flying plans for me. I’m off to France. In my car. Under the channel. Lars Bevanger, Deutsche Welle Radio, Manchester.

One comment on “Postcard from Britain: The problem with Iceland”