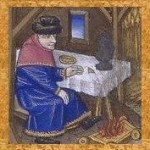 A varied diet and the odd luxury...

UK economists say medieval Englishmen were better off than many people in poorer countries are today. A paper by researchers at Warwick University suggests people living in the 12th and 13th century England earned on average €755 a year in today’s money.

This would allow them to eat well and even to buy the occasional luxury item. By comparison today’s residents of Ghana, Cambodia, Ethiopia, Tanzania and Burundi on average make considerably less. Some now wonder whether Medieval England was a happier place than today’s nation, with it’s record public debts, job losses and the general stresses of modern life.

Yet the medieval English did tend to die in childbirth, had not access to antibiotics and were near defenceless against epidemics like the black death. Also the relative prosperity of medieval England compared to poorer nations today could say more about the shortcomings of our modern globalised world than of the success of the young English nation.

600 years on, the median income in Britain is more than €30,000, while today’s poorest people still have not caught up with the medieval English.

Listen to my report for Deutsche Welle Radio here: