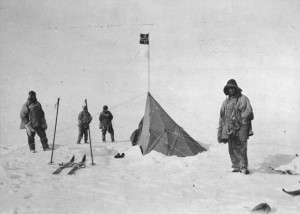 On 14 December a 100 years ago Norwegian explorer Roald Amundsen became the first human being to reach the South Pole. He remains a national hero in Norway, while his British competitor, Captain Robert Scott, has often been portrayed as a hapless amateur who never stood a chance in the race for the Pole. Captain Scott died not long after discovering Amundsen’s Norwegian flag already planted on the South Pole. But the centenary celebrations have seen Scott emerging as a hero in the UK, and in my postcard for Deutsche Welle Radio I ponder whether to reconsider my childhood views of the tragic Robert Scott.